The TrackMania Interview Project is a project made by the user wormi over at the TMX/MX community. The project strives to interview various people involved in Trackmania in one way or another. It can be everything from old veterans in the scene to top professional esports players to tournament organizers etc. So far, there's been 9 interviews in the series.

The latest interview in the project has now been published, and the person being interviewed is someone that needs little introduction: World Cyber Games 2009 Trackmania Nations Forever World Champion 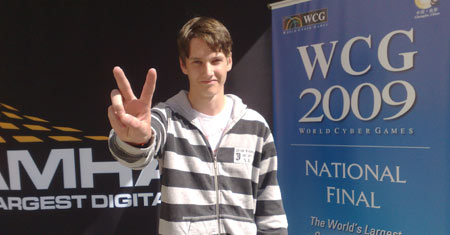 Here's a little sneak-peak from the interview:

More about tracks: which is the best track you have driven?  Oh that's a hard question, I've played so many good tracks, picking out the best one is almost impossible.. But I'm gonna have to say "AnGel by Ron Turbo", the old classic track from TMN ESWC. It's for sure one of the tracks that I played the most, and it never gets boring. Being so old (made in march 2006) and so good is damn impressive. Sadly I don't have the WR on it anymore, but I might hunt it back one day!

To read the full interview, click here (You'll find the 8 other previous interviews in the project to the left on the page if you want to read them too).

Thanks for advertising my interviews :)