This is the ninth in a series of articles revealing the top twenty TrackMania²: Stadium tech drivers of 2014. For more information, see the first post. 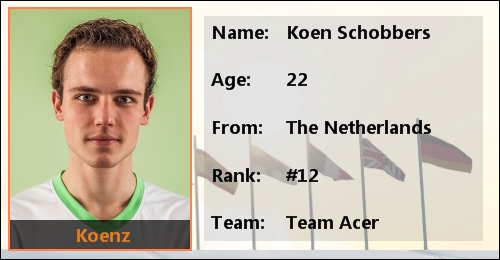 Twelfth place is given to

Koen "Koenz" Schobbers, an experienced Dutchman who has been racing with Team Acer since January 2013. Schobbers is said to be at his best under pressure, and we saw examples of this throughout 2014. He is capable of carrying in team match situations and holding his own in tough offline events, which we will also discuss in this piece.
The year 2014 began somewhat disappointingly for Schobbers with the ESL CPS12 playoffs. Team Acer had taken second place during the groupstage, and therefore proceeded directly to the semifinal, where they would face BX3. In the two against two submatch Schobbers, joined by

Jonas "JohN" Kemmer. Although he was not bad during the match, Schobbers was on many occasions saved by his team mate before they took the submatch 12-10. Schobbers continued to rely on his team mates for the rest of the submatches, not what many expected from the Electronic Sports World Cup 2013 bronze medalist. Team Acer advanced to the final, but the Dutchman was unable to show his ability on the three maps since he did not play in any of the final's three submatches.
Just a month later in Alienware Cup 38, Schobbers again didn't drive to his full potential, dropping out during the first round after losing to players such as

Calvin "Dovi" Kuhnt.
Right after this cup, the TrackMania Masters Team Cup's 2014 edition began. Team Acer took a spot on the podium, but Schobbers didn't play in the third place match against 3DMAX, or the semi-final against Team Dignitas. However, he drove some maps during the group stage and early playoffs, playing especially great against Very Short Players in the round of sixteen. Schobbers took the second highest points total, although team captain Videkull by far played best, amassing sixteen more points than Schobbers.
Next up was ESL CPS13, a tournament in which Schobbers perhaps didn't meet expectations, and concluded his somewhat quiet first half of 2014. Schobbers helped his team over the groupstage with an array of decent match performances; he didn't top scoreboards, but instead was usually comfortably in the middle. Team Acer, just like in CPS12, placed second in the group stage, and once again proceeded directly to the semi-final where they would meet BX3. After Acer took the first two submatches with ease, Schobbers took his place alongside

Ördög "Royal" Botond to play in the 3v3 submatch. The match was exciting, and BX3 would have taken it if not for the heroics of Schobbers and his team mates. After going 6-4 down, Team Acer won four rounds in a row, to take the submatch, and Schobbers was a key part in this comeback, making no mistakes in those decisive rounds.
In the grand final they, perhaps unsurprisingly, met Team Dignitas. Schobbers here played the five versus five and decider submatches. For reasons unclear, Schobbers played disappointingly and took the bottom spot on both submatch scoreboards. There were many tight rounds, but needless to say, the Dutchman could have done more to help his team. Dignitas, after a long and close decider map, took the final 7-5 and defended the CPS title. As we can see, Schobbers had a relatively average first half of 2014, for his standards at least. 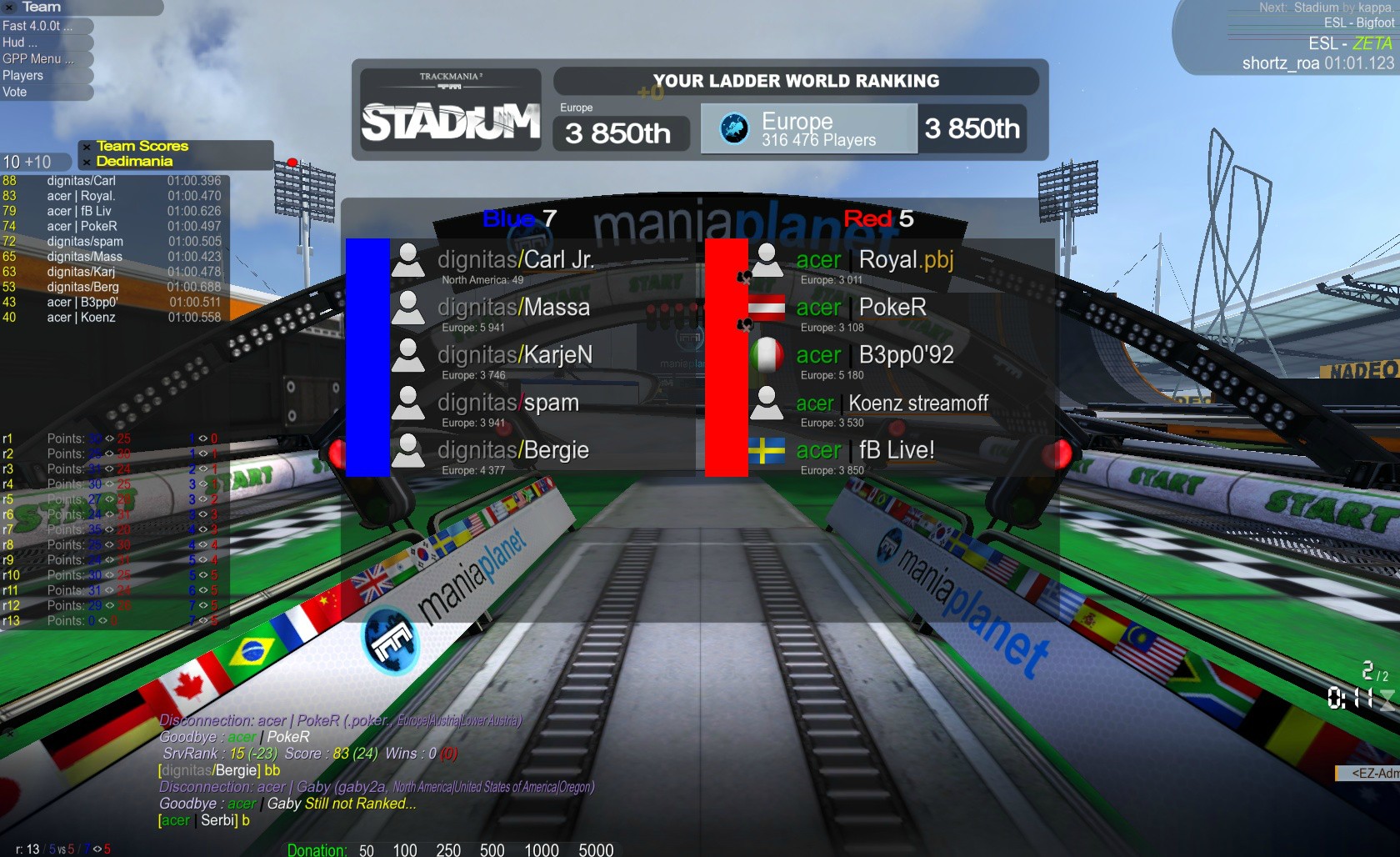 Koenz wasn't pleased with his performance. Credits: Kalle "frostBeule" Videkull
It is worth mentioning the large number of small LAN events that Schobbers attended throughout 2014. At the very end of February the Dutchman took part in Frag-o-Matic 16.1 lan event in Belgium, and won it convicingly after beating the local players. Only

Raphael "paiN" Felten was able to challenge Schobbers in final, but he managed to take the title before others reached the finalist mode. Schobbers also won The Party LAN in the Netherlands. Held over a weekend in mid-April, this fun-orientated tournament used fullspeed maps as well as more traditional tech maps.
Over the second weekend of September, he attended a and conquered another edition of Frag-o-Matic. This time, it was

Toby "Lifelux" Van Buynder who most challenged Schobbers, but as usual he managed to step it up and take first place, his fifth Frag-o-Matic title. A month later, he took his skills to The Reality LAN, a local tournament in the Netherlands. It must be said that the competition Schobbers faced here was, like at the other smaller LANs mentioned above, mostly less difficult to overcome than in online competitions. Neither

Robert "Tamarillo" Crone, the two other most well-established Dutch TrackMania players, were there to challenge him at The Reality, and thus Schobbers was able to take his third Reality title relatively comfortably.
At the start of November came the highlight of the year: Electronic Sports World Cup, organised as a part of Paris Games Week at Porte de Versailles exhibition centre. The previous year, Schobbers managed to surprise some and take the bronze medal. The competition he would face in 2014 was more diverse and arguably at a higher level than before, but Schobbers looked to be a top contender, having reached the final in Against All Authority's pre-tournament practice cup. After the Time Attack session driven Saturday morning, Schobbers was placed in a group with

Julian "Asserich" Novaček. The Austrian was sent to loser bracket and Schobbers continued in winner bracket, where he next met

Leo "Leo" Falcomer-Dawson. Pacher won, and both Bergmann and Schobbers got finalist mode. Schobbers looked to be on his way to the losers bracket after Bergmann took a commanding lead during a round on the map Utopia, but instead Bergmann "did the unexcepted". Deciding to take the riskier bug-finish, and maybe unaware of his big lead over Schobbers, Bergmann failed to finish the round after his car narrowly missed the ending block's finish zone, allowing Schobbers a free pass to the third round of the winners bracket.
Heading to winner bracket semi-final, he was up against last year's champion

Benjamin "Kronos" Suzenne. Undoubtedly, Schobbers had a hard task to make it through. Cloutier steamrolled through the match, gaining far more points than others, and ultimately nobody was able to challenge him as he took first place. Schobbers and Wilson had a tight fight for second place, but it was Wilson who would take the second winners bracket final spot. Schobbers now would have to continue his ESWC journey in the losers bracket.
Although called the "losers bracket", the level of competition there was almost as high as in the winners bracket. There he again faced top-level opponents: Skarstein, Bergmann and his fellow-countryman Crone joined him in the losers bracket semi final. Crone took first place, winning against the other finalist Bergmann, but after that Schobbers also was a finalist. He made a tiny mistake, giving a two tenths of a second lead to the Norwegian, who used the chance to win a round and knock Schobbers and Skarstein out of the tournament. Perhaps disappointing to him after his superb showing in 2013, finishing within the top 12 drivers at the "TrackMania world championships" in still impressive.

Koenz playing during the ESWC Time Attack seeding. Credits: Gabriel "Gaby" Guibert
After ESWC finished, the playoffs of the famous Stadium Team Championship started. The competition itself began in September, but due to the fact that over thirty top-level players were in Paris for ESWC, there was a break to accommodate the big LAN event. Team Acer passed the groupstage with ease, but would surely have to put more hours into practicing for their playoff games.
Schobbers and his team mates were up against iGn-eSports in the round of sixteen. Schobbers played well , and even scored the most points on second map, leading Acer to a  2-0 victory. Their next opponents were the Funteam players, who they met in the quarter-finals. This turned out to be another somewhat easy match for Acer, taking them to the semi-finals where they faced Very Short Players. Schobbers had a solid match, taking second in points both maps and winning the first three rounds of the match. Team Acer take another 2-0 victory.
The grand final was—once again—a match up between Dignitas and Acer. Heavily anticipated, it was during this "El Clásico" of TrackMania that we saw some of Schobbers' best team-match racing of 2014. In the first map, that Acer won 7-6 (no tennis mode in STC), Schobbers gave a casual performance, doing just enough to help the team win. In the second map, however, he went for one of his best online performances of the year, if not the best, taking 71 points and topping the scoreboard while Acer wins 7-3. Only

Dennis "Massa" Løtze was able to challenge the green-tagged team.
Schobbers' competitive year ended with the ESL CPS14 groupstage. After

Kalle "frostBeule" Videkull's retirement at the end of the year's STC season, his team mates struggling to step up and replace him, causing them to lose matches they may previously have won. Schobbers played much as he did in previous 2014 team tournaments at this point, and like his team mates was not able to provide the carrying force to win Acer matches.
With his effort in team competitions and the amount of good LAN results considered,

Koen "Koenz" Schobbers takes a spot on our list. He seems to struggle in some team competitions, but steps it up in must-win situations, showing that he is able to perform under pressure. Summing up all the factors, we give him the twelth position.
Video:  ESWC LB semifinal, casted by frostBeule.
Jump to next article in series.