What happens to the community? Did creative freaks found a new drug that enhanced their brain capacities? Indeed, two awesome title packs have been unleashed from the depths of some player's minds for this month. So Triseaux, manager of the ShootMania : Storm PyRoGEN team just released his "Search and download Pro" Title pack.

This new title pack is here to bring a new pro face for the classical "search and destroy" Game mode. He worked on balance, Teamplay and Skillcap, with all the features available on NADEO's fps so as to bring one mode that could fit to competitive players. Specially those who get tiered with an ELITE mode that might bore sometimes, and where the only new aspects are the maps.

So if you are one of these players and want to try something new, you shall test that 3v3 team mode. 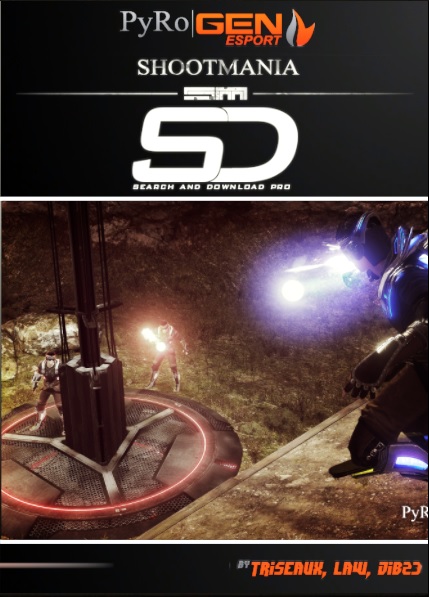 Can you describe a bit the creation process?

All began from a Jib3z idea, a developer with who i worked with during Alpha stage. He asked me to make another competitive game mode to make something else than Elite. A Teamplay based mode. We both played to Css Cod and Bf so the Bomb to implant was obvious for us. But i did not want something for campers and slow play, so with ShootMania it was just perfect, since it is fast, you can walljump, get more weapons, amo, Armor points.

First we saw what was possible at that time, and we tested several things. But with the ShootMania evolution (beta 2, 3...) a lot of new things came up and let us do something new, but too bugged unfortunately. Like script incompatibility and updates. We had to come back on codding to fix all the bugs every time there was an update.

Jib3z, after some times, quitted ShootMania, so i finished the work alone. The problem is, with all the competitions, the management of the PyRoGEN Team and the traveling for tourneys, i could not finish the work. LAW helped me and joined the adventure few weeks ago. A love story began with him. Without him, i would not have been able to release it.

At that moment, we are testing it to fix some bugs that remain. After the release, some changes will be done, depending on the player's feedback. We have some modifications on the score board and some visual effects too.

What do you want to bring with this mode?

I do not think i will bring the ShootMania revolution, but it can bring an alternative to the already existing mods, and maybe why not being a great concurrent to Elite (i know that i love dreaming)